THE INTRIGUING WORLD OF TROUBLE

Back in the 1990s, when I wrote a romantic mystery called FEAR FAMILIAR under the pen name Caroline Burnes, I had no idea how this black feline would change my world. He was based on a wonderful cat I had named E.A. Poe. A stray that was left on my doorstep in a carrier by someone who had trapped him and couldn’t keep him. Of course I took him in. And thus Poe/Familiar became the featured character in 22 books. 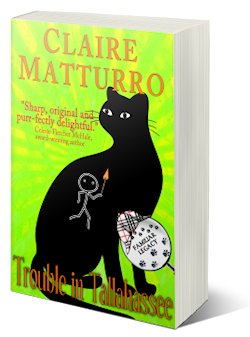 When Poe died at the age of 15 of kidney failure, I couldn’t write the Familiar stories any more. I just missed him too much, and Familiar and Poe were linked in my heart. My writing career took another direction with TOUCHED and SUMMER OF THE REDEEMERS (soon to be re-released! I have fabulous covers—I just need time to edit the scanned versions). And then the creation of Sarah Booth, Jitty, Tinkie and the Zinnia gang. (Never fear, these books will continue with TWO! In 2018.)

Another black cat came into my life. My neighbors found this sad creature in their garage. His front leg had gotten hung in his collar and had atrophied and begun to rot (sorry, this is graphic but true). They didn’t want him, so I took him immediately to the vet and the long, hard process of saving his front leg began. Dr. Lynne Leonard did remarkable work on him with acupuncture and helping to “release” the scar tissue that held the leg in a rigid position in front of him. And my college students came to the farm and helped me do three hours of physical therapy each day, breaking that scar tissue, giving that leg strength and agility. And amazingly, we were successful. Coal Shaft Haines regained full use of his leg and became the resident black cat at Casa Carolyn.

Trauma always takes a bite out on the backend, for critter or human. Coal lived to be 13, but he developed diabetes and ultimately renal failure. And in one of those very strange situations, it was his death that prompted me to move forward with the new Trouble books. I miss Coal Shaft so much, and he is the prototype for Trouble, the black cat detective with a British accent. The books are an homage to a black cat I miss very much, and who actually did watch Benedict Cumberbatch on television as Sherlock. He LOVED him. I know if Coal Shaft could have talked, he would have been slightly British! 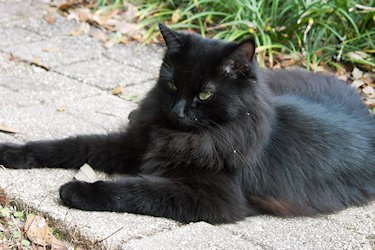 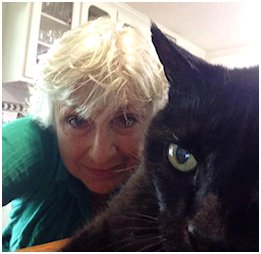 And so with the idea of launching a spin-off of Familiar, I re-opened KaliOka Press and gathered some of my writer friends. The things I’ve learned about indie publishing are that excellent content—and plenty of it—and pricing are crucial. To that end, I invited my writer friends, some published, some not, to help me create the remarkable world of Trouble, son of Familiar, and black cat detective. In the meantime, I got the rights back to some of the Familiar books and put them up for .99 cents. And I found Cissy Hartley at www.WriterSpace.com to be an exceptional cover designer.

Because I have future plans, we called the series Familiar Legacy (after all Trouble is the son of Familiar) and I have a trick or two up my sleeve for the future. The writers all began writing our books, and so far, we have 4 available to read or preorder. And more are on the way. 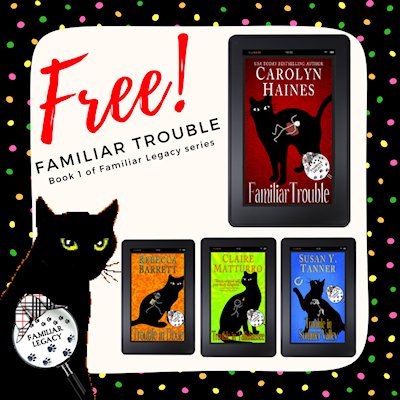 FAMILIAR TROUBLE (by me) is FREE. Just to give you a taste of the series and what we’re up to with our romantic mysteries and a black cat detective with total sass and Cupid’s ear.

TROUBLE IN DIXIE is by Rebecca Barrett.

TROUBLE IN TALLAHASSEE is by Claire Matturro.

TROUBLE IN SUMMER VALLEY is by Susan Y. Tanner.

And Rebecca has a very special Christmas present for the Trouble readers coming up. We are also preparing a Valentine’s Day anthology of short fiction—and all proceeds from sales will go to Best Friends Animal Sanctuary—a fabulous place that takes care of all kinds of animals. This is our Valentine to the animals we love and want to help.

Each of our books features a remarkable feline and his/her humanoid, so we get to showcase some cat lovers as well as our writers, who are cat lovers. And we have a blog here! Cat-tastic!

And we have plenty more books coming with more wonderful authors and also some repeats of the writers you already love. Our goal is to have a new book each month, or perhaps every other month, depending on how long Priya and I can keep this insane pace. Lord I need to be 30 again! And let me give a shout out here to Priya Karsan Bhakta, vice president of KaliOka Press and the person who gets things done. When she walked into my classroom years ago, my destiny was changed. 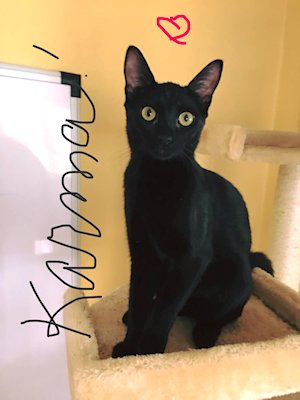 Speaking of destiny, I have a new black kitty now, Karma. She’s a handful. And what I see in the future are MORE Familiar Legacy books featuring Trouble’s sister—Karma. But that’s the future and I almost can’t chew what I’ve already bitten off today.

Keep a good thought for our friends and family in Texas, Florida, the islands and the Keys. The Mississippi Gulf Coast still hasn’t recovered from Katrina, which was 12 years ago. This is going to be a long, hard process for those mauled by the storms this year. One of our writers, Claire Matturro, lives in Florida and she had no power when her book came out September 12. That is just wrong on so many levels. And sure, missing a book launch pales in comparison to so much destruction, but it still sucks. We’ll make it up to her with the next book!

One more thing — I’m giving away a paperback edition of THE HOUSE OF MEMORY in my Monthly Contest!

CH and the critters!