This month saw the release of Book 2 in The Jexville Chronicles, a story called TOUCHED. Set in rural Mississippi in 1926, TOUCHED tells the story of love between Johanna McVay and her daughter Duncan, a 9-year-old who is struck by lightning while dancing. Duncan survives, and she’s given the gift of prophecy, but she can only predict drownings.

Narrated by 16-year-old mail order bride Mattie Mill, TOUCHED explores what it means to be different in an isolated community where any exception to the norm is viewed as dangerous. Johanna McVay is a free-thinker. A dangerous woman. And the child she is raising is believed to have been touched by Satan.

This book is very close to my heart. None of the things that happen in the book are factual, but there is raw truth in the emotional terrain of the story. When my mother was 9, she contracted polio. People were terrified of polio because it could maim, kill, paralyze. My mother was in the Warm Springs Foundation in Georgia on and off for over 9 years. She met President Franklin Roosevelt there. Warm Springs was the premier treatment center for polio at the time. But polio was a life changing disease (and so please be sure your kids are vaccinated!)

All proceeds from the sale of the Jexville books go to Good Fortune Farm Refuge for the care and treatment of the animals who live here. GFFR also hosts spay/neuter initiatives for owners who can’t afford to give their pets this vital care. We do gratefully accept donations and links are provided in the books. Each dollar spent for a book goes directly to the refuge. If you’d like to donate now (no donation is too small or large), you can click here: GFFR 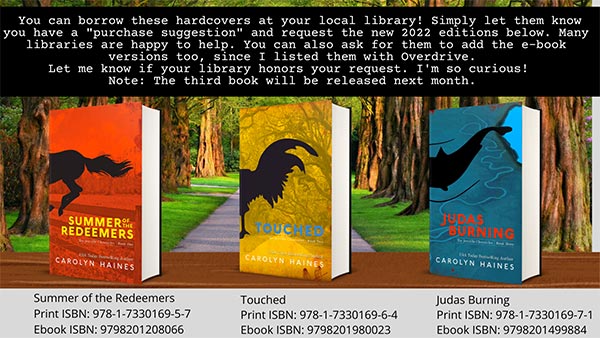 When TOUCHED was first released in 1996, it was widely reviewed by the NYT and London Times. It’s a book I’m very proud of. I hope you’ll give it a try. Remember, you can ask your local library that you’d like to make a “purchase suggestion.” If they agree, you can borrow the book with your library card! It’s listed with Ingram, so libraries can easily acquire this lovely new hardcover edition with an updated cover designed by Nikkita Bhakta, whose artwork was flown in outer space on the Space Shuttle Atlantis. Or you can ask your independent bookstore to order it for you to purchase! But please make sure you get the new 2022 edition.

My favorite downtown indie bookstore is The Haunted Book Shop. They’d love to ship out any book to you!

Bust out that library card and borrow my books!

In other book news, today is the last day to get BONE TO BE WILD for $2.99—a publisher’s discount for the e-book. And next month, A GARLAND OF BONES will be on sale for $2.99 for all of September. 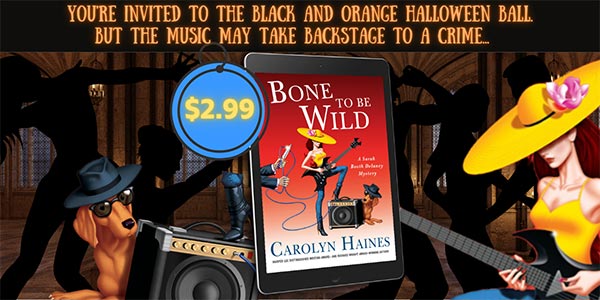 Bones. Bones. Bones! I’m digging up bones. I’m excited that BONES OF HOLLY, due to be released October, got a terrific early look at Kirkus Review! Here it is:

A mysterious disappearance disrupts a very Southern Christmas.
Detective duo Sarah Booth and Tinkie Bellcase Richmond are in Bay St. Louis, Mississippi, along with Tinkie’s baby, Maylin, and the ladies’ significant others to judge a Christmas tree decorating contest. Their fellow judges, authors Sandra O’Day and Janet Malone, are always at daggers drawn, and the sleuths soon get to see their fraught relationship up close. When Sandra and her assistant, Daryl Marcus, vanish from a party, leaving traces of blood behind at her mansion, which Al Capone built for a daring actress, Janet surprises Sarah Booth and Tinkie by hiring the pair to find them. They’re soon entangled in past and current tales of Capone’s missing fortune, which could very well be hidden in the house or somewhere on the Gulf Coast, where he brought in loads of illegal booze. Along the way, the women learn that Sandra and Janet are not the bitter enemies they portray in public, making them wonder if it’s all a publicity stunt, but rumors of the dangerous Gulf Coast Mafia suggest another possibility. Although Daryl’s fishing family claims to know nothing, the contacts of Sarah Booth’s lover, Sheriff Coleman Peters, come in handy in getting information from unlikely sources. As the tough Southern belles continue the search, they get threats and are stalked by unknown people. But they won’t back down in their search for the missing pair and possibly a very large fortune.
Fascinating characters dripping in grit and Southern charm highlight a twisty puzzler.

Critter care update. The animals are doing okay. Dick Cheney loves me to death and hates the other cats. My heart, Eudora Welty Haines, had more cancer surgery Aug. 12. She developed a huge hematoma on her neck where she had one surgery. It was awful. But the vet put in two drains and she is feeling much better. I just feel so bad for her. She never complains. She is always talking and wagging her tail. Keep a good thought for her.

I have a BOOK GIVEWAY CONTEST!!! Look at the image below. What is it?

I promise it’s something common. Post your answer in the subject line of an email and send it to sarahbooth@carolynhaines.com. I’ll pick two winners who will receive an autographed ARC (advance reader copy) of BONES OF HOLLY. Fun, fun, fun! Even if you don’t know what this is, take a guess. Be outrageous and take a tiny risk! Two winners will get to read the book before everyone else. I’ll pop the prizes in the mail next week – U.S. entrants only. 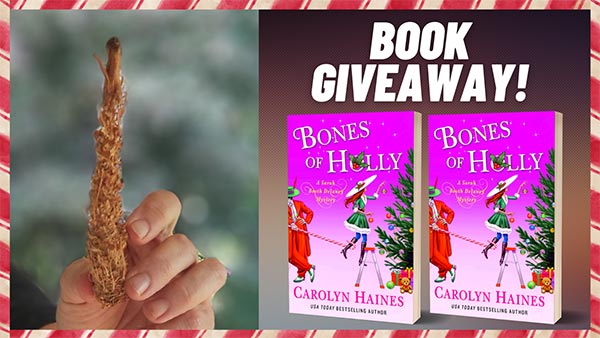 The best news is that September is here! Have a listen to one of my mother’s favorite songs: September Song. I sure miss those days when my mother and I would listen to the stereo together.

Until next month—fall wishes from Carolyn and the Critters!

P.S. This month’s prize is an e-book of Skin Dancer: Monthly Contest

Goofing off six years ago with Christy and Cissy.