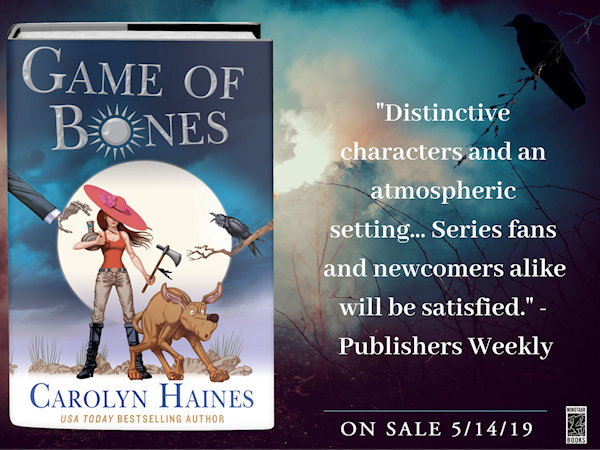 At long last, the 20th Bones book, GAME OF BONES, is on sale. I’ve been writing about Sarah Booth, Tinkie, Coleman, Jitty, Harold, Oscar, Sweetie Pie, Pluto, Chablis, Reveler, Miss Scrapiron, Lucifer, and Roscoe for over two decades. I thought this might be a fun time to tell you how it all came to be.

Back in 1998, I’d finished a two-book contract with Dutton for SUMMER OF THE REDEEMERS and TOUCHED (which I will soon be bringing back into print!). These two books, set in Mississippi at different time periods, were general fiction, though both had a strong mystery element. But when that Dutton contract was done, I wasn’t certain what to write next. I’d been writing Harlequin Intrigue for a number of years (37 of those, all told) but I was also wanting to write other things too. I just needed a story that demanded to be told!

Sitting at my desk looking out the window, I was watching my horses graze. I was casting about for a story when I heard these two women squabbling. It was Sarah Booth and Jitty. I had no idea at the time Jitty was a ghost. I just started writing down their dialogue.

I wrote THEM BONES in kind of a non-stop torrent. I’m a big believer in plotting out a mystery, because the clues and red herrings have to be laid properly. But I didn’t know I was writing a mystery. I was just writing a story about this woman named Sarah Booth Delaney who was deviled by this woman named Jitty, who turned out to be a ghost.

This story came to me long before the idea of the cozy amateur sleuth was so popular. Of course, Agatha Christy and MURDER, SHE WROTE were popular at this time. The big names in the late 80s were John Grisham, Ellis Peters, P.D. James, Elizabeth George—all people I was reading like mad. But my book was funny. It didn’t seem to fit in, but still, it was the story I had to tell.

When I finished the book, I turned it in to my agent, who sent it out to a number of publishers. This was mostly a new process for me. I had no idea what to expect, so when several publishers began bidding on the book, I was over the moon. Ultimately, we had seven bidders that winnowed down to the publisher we went with, Random House. They wanted a series, so it was a three-book deal. Random House actually published the first five books. If you look at the covers, you can see the difference. The first 5 are branded more as straight up mystery, while after that the covers are more aimed at the cozy mystery world, which had begun to grow and develop a real audience.

And so my journey with these characters began. Little did I know that I would write 20 books in the series—and I just signed a contract for 3 more, so don’t worry! Sarah Booth has plenty of spunk left. In the crazy world of writing, I can’t imagine my life without these characters. They are family to me. And over the past two decades, I’ve spent more time with them than anyone else. Reading one of the books can take a week or so, but it takes me almost a year to write one. So I am with the characters almost every day. Crazy, huh?

But that’s the story of Sarah Booth. And along the way, I’ve written some other books—more black cat detective, some ghost stories, some horror stories. I just want to thank you all for going on this crazy ride with me.

Now on to more book news. I’m bringing back THE DARKLING and THE SEEKER in the next few weeks. These are horror, originally written under the pseudonym R.B. Chesterton. They will be under my name now. And SKIN DANCER, my ultimate revenge book against poachers. I’m also eager to see the Jexville trilogy (SUMMER OF THE REDEEMERS, TOUCHED, and JUDAS BURNING) back in print. All coming in the not too distant future. 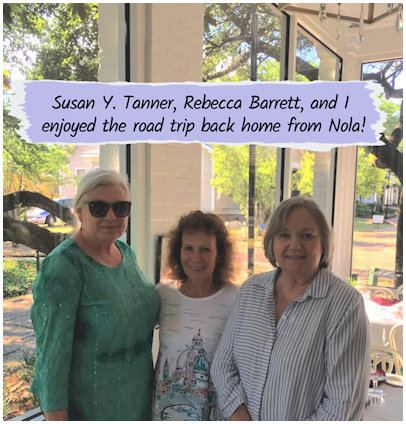 July will see the publication of Susan Y. Tanner’s TROUBLE IN ACTION, the 10th book in the black cat detective series. I’m busy every minute of every day. Busy is good, but sometimes I go a little over the top.

I have a lot of trouble sleeping—my brain just wakes up in the middle of the night and adrenalin shoots through me and I’m wide awake, thinking about a plot or book or publishing issue, or sometimes on those dark nights, a sick animal or relative or friend. Those things plague me. So I did something about it. I went to a hypnotist. It’s a very interesting process. Not like what I expected. But Marguerite Dillon did a super fabulous job. (She’s local here in Mobile, AL.) Since I went to her, I’ve averaged 7 hours of sleep a night. I was getting 4-5 hours a night. Sometimes 2. That’s a big, big difference to someone who is sleep deprived. I’m that person who can fall asleep standing up—but I can’t stay asleep. So this has really given me a new lease on life.

Also, I’m out of the boot and getting a lot of neglected farm chores done. Five tons of lime delivered and spread, plants transplanted, grass cut, nematodes put out to kill the fleas, etc., etc. It’s a lot to do in the spring, and I missed the really terrific weather because I was trying to baby my tendon. It’s better now, but I’m still taking it easy.

I just wanted to remind you that you can make a big difference for some senior animals while also getting some terrific original mysteries! How, you might ask? Click this: Summer Snoops Unleashed

Last week Maria Grazia Swan told you about this collection. Joanna Campbell Slan asked me to remind you. It’s on pre-order and goes on sale in July. Older pets have a really hard time. I care for a lot of them at Good Fortune Farm Rescue. It truly is a labor of love, and it is time consuming and expensive. All proceeds from this collection go to the animals. The writers involved have selected 3 senior care facilities (GFFR is not included—but GFFR has been the beneficiary of writers who did a Christmas collection and donated the proceeds to us, and it allowed us to spay and neuter some cats and dogs and to get medical help for others.) It’s a really compassionate thing to do.

We had quite a feast while we were in town for Book Lovers Con in New Orleans. Is it time for me to have a juice cleanse? I certainly enjoyed every bite.

If you’re in the Houston, TX area, don’t forget to come by Murder by the Book at 6 p.m. tomorrow, May 29. I’ll be there signing GAME OF BONES. And I will also be at Southern Bound Book Shop in Biloxi, MS at 5:30 p.m., May 31. We’re discussing maybe a little talk but plans aren’t finalized. I’d love to see all my Gulf Coast friends. I haven’t done a lot of book signings in the past few years—too many animals, and so many bookstores disappeared. But Mobile has a new one, and Gulfport has a new one…we’re back! And communities are all the better for it. Support your local bookstore! 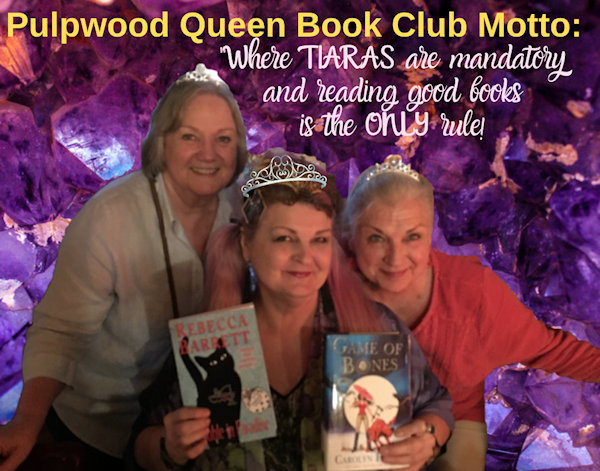 Rebecca and me with the Pulpwood Queen Ms. Kathy Murphy who runs a nationwide book club program with hundreds of local chapters. Check it out!

Hope to see you on the road. Here’s a little bit of Willie to get you in the mood. I love this man. He’s taken in a herd of wild horses on his Texas ranch to protect them. Buy his music—he uses the proceeds for good things: On The Road Again

Ye-haw from all the critters at Casa Carolyn

P.S. If you’re not on social media and missed out on me attempting a British accent, check this video out: Mad Catters

P.P.S. Another book giveaway for one of my readers: Gift Giveaway 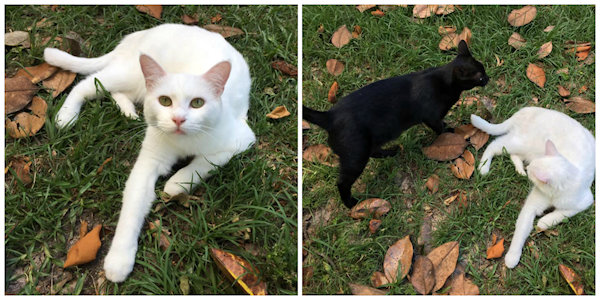