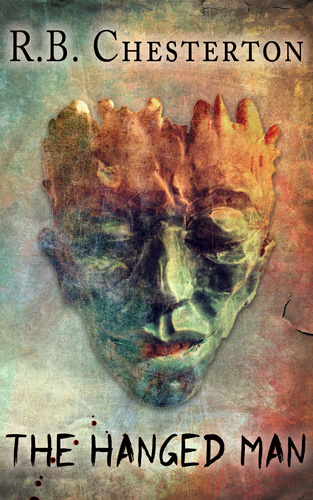 In New Orleans, anything can happen.

Harper Lee Award winning author Carolyn Haines, writing as R.B. Chesterton, explores the New Orleans of Marie Laveau in a short story, “The Hanged Man.” The e-story is available in all formats.

Since Rachael Reynolds disappeared while vacationing in New Orleans. A bright and beautiful nine-year-old, the child vanished into a steamy August day, never to be seen again.

When every lead came up a dead-end, Laura and Michael Reynolds finally returned to New York, where they threw themselves into their respective careers with the ferocity that only grief can inspire, and they have thrived.

It has been three years…

And Laura is ready to finish the healing process. She proposes a return to New Orleans. Michael is reluctant, but at last agrees.

The Hanged Man is the story of that journey and the consequences of revisiting the past. At once chilling and compelling, it will stay in your mind for some time.

Free Sample of THE HANGED MAN
A short story by R.B. Chesterton

There is something about the smell of wet asphalt on a hot August afternoon that brings New Orleans flooding back across the distance of a thousand miles and several years. Laura stands in the open balcony doors, the scent rushing in past her. She walks out and leans on the balustrade. Central Park is visible, and she seems to be looking in that direction. From the way she stands, though, I know she, too, is living in the past. Struggling against the pull of a place we planned as a vacation destination.

In the three years that have passed since that fateful vacation, Laura has grown thin and edgy. Both physically and with her work. Gone are the flowing skirts, the jaunty sundresses and hats she once designed for her high end children’s line of clothes. She is monochromatic now, in design and emotion. Lean and sleek. And the fashion world adores her.

Loss is a peculiar thing. It drives creativity, and it fuels the dark emotions that inspire a designer or writer or musician to bring forth a creative child whole-cloth. It is loss that compels creativity. Those basking in the glow of sunny longings and gratified emotions seldom feel the need to spend the solitary hours in the pursuit of creation, whether it is composing a sonata or designing an evening gown. Laura and I have bathed in the dark water of loss. Since the death of Rachael, she has poured herself into her work, and I have watched the transformation. And I say death, but the body of our daughter was never found.
It was August 12, exactly three years ago we left the City that Care Forgot, changed forever. Laura is on the balcony smoking a forbidden cigarette with her morning coffee. I’m reading the newspaper in the nook, watching her. Gray threads her hair, and she is far too young for that. And too independent to color it away. She says she’s earned it.

She is so slender, her hip bones protrude in her Yoga pants. The loose top hangs on her flat chest. She is barefoot, leaning against the wall, the coffee steaming in the hot, still morning.

“Let’s go on vacation,” she says, surprising me. “Tomorrow. I can get away if you can.”

“Vacation?” Such an idea never crossed my mind. We don’t leave the city any more. Ever.

“Okay.” I am cautious. Laura is not impulsive. She doesn’t decide to desert her successful design company for a vacation, even for a week, on a spur of the moment lark. “Where would you like to go?”

She comes in and shuts the balcony door and the smell of New Orleans disappears. “Before I tell you, promise you’ll hear me out.”

“Of course.” I always hear her out. It’s something I’m very good at, and she tells me so often.

“I want to go back to New Orleans.”

I rise so suddenly that my thighs catch the tabletop and nearly tip it over. The coffee cup crashes to the floor. “New Orleans. Why on earth—”

“Because I’m ready to heal.”

The calmness of her voice penetrates my fear. “Laura, I don’t think we should ever go back there. Not after—”

“Not after Rachael was kidnapped.” She says it with complete calm. No tears, no emotional surges of action and despair. Just like that. “Rachael was kidnapped.” Our nine-year-old daughter stolen from a park while she ate a snow cone. Rachael taken and never seen again. Rachael, who modeled Laura’s line of children’s clothes, who popped into bed with us each morning for a tickle session, who could melt a stranger’s heart with her smile. “I have an idea for another children’s line. I want to go there to photograph a couple of the dresses for a magazine spread.”

I couldn’t move or speak. The idea was so preposterous that I was pole-axed.

“Let’s go tomorrow, before you have time to think of a million reasons not to.”

At last the spell is broken. “I don’t need time. Our daughter was stolen there. You would go back there again? Well, go by yourself.”

Barefooted, she bends to pick up the broken coffee cup.

“Stay back. I’ll get it.” I have on shoes because I have to be in the office. The last three years have seen my advertising agency over-run with work and high-end clients. The pace is grueling, but the work satisfying. Even as I grab the broom, I hear her curse softly. When I return, she is sitting in my chair with a jagged piece of mug in the ball of her foot. Blood drips steadily, mingling with the puddles of black coffee.

She sits perfectly still watching the blood drip. She makes no move to extract the glass.

She starts and finds my face with eyes that are glazed by the blindness of bad memory. Her expression is as helpless as a child’s.

“I stepped on the glass.”

I kneel beside her and pull the shard free before she can react. In another moment I have her foot wrapped in a dishtowel. It takes a bit of persuasion, but she allows me to wash it and examine it. For such a bleeder, the cut isn’t deep. Stitches would be hard to hold unless she stayed on crutches, which I knew is out of the question. When Laura can’t move freely, her world goes to hell.

I apply ointment and wrap it. From the hall closet I fetch an old pair of crutches I’d used last winter when I slipped on an icy patch in the middle of Fifth Avenue and sprained my ankle. With some minor adjustments to the length, she is ready to go to work.

“The vacation?” she prods.

“No.” My briefcase bulges with the marketing plan for Jaru’s Jewelry, a hot and trendy jewelry designer who is the current darkling of urban twenty-somethings. In the boom and bust of Internet love affairs, I give Jaru’s sixteen months to hold the audience share they’d garnered. In that time, it is up to me to make it count in building the name into a brand. I’m very good at my job.

“Absolutely not. I can’t believe you’re even asking. We lost everything there. And now you want to go back?”

“I do,” she says, hobbling to the front door on the crutches. I pick up her portfolio and open the door for her. As we make our way down the plushly carpeted hall to the elevator, I refuse to discuss it.

“I’m going,” she says as the elevator doors close behind us. “You can come or not.”

She is composed, and cool. Her mind is made up. I know that tone and the look in her pale gray eyes. She will go without me.

“I’ll book two tickets when I get to the office. If you don’t come, you can change yours to go wherever you’d like. I’ll be gone a week.”

“Thanks for the itinerary.” I am furious. How like Laura to take charge. It’s follow along or be left behind. Or run over if I’m too much in her way.

The elevator opens and the doorman rushes forward to help with her portfolio. We step outside, and the heat and humidity hit me like a wave. New York City in August is every bit as stifling as any Southern locale. It rained in the night and the morning heat is burning off the water, creating a cocoon of misty condensation exactly like the disputed city.

Frederick hails a cab for Laura and ushers her into it. “Please come,” she says, touching my hand through the open window.

I don’t answer. I step back as the cab pulls away. My gaze shifts across the street. The morning bustle has begun as New Yorkers take to the sidewalks, striding to work. I love the movement of the city, the walkers and bikers and cars and buses, everyone intent on a destination. New Yorkers have goals, ambitions. It is the city that never sleeps, and that has given me great solace since Rachael’s disappearance.

As I aimlessly watch the throngs moving along the sidewalks while Frederick hails a taxi for me, I catch a glimpse of someone familiar. He stands at the corner and watches me. He is tall and very black with dreadlocks tied back in a colorful bandana. His yellow shirt hangs from his thin frame. He nods at me once and then blends into a wave of pedestrians who’d been given the light to walk.

When I realize where I know him from, my mouth dries.

© Reprinted by permission. All rights reserved.