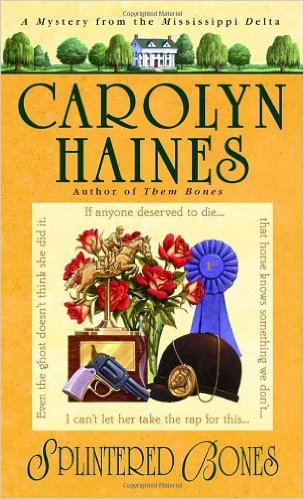 She may be a born-and-bred Mississippi belle, but it’s been a long time since Sarah Booth Delaney was a pampered daddy’s girl. Unwed and over thirty, Sarah has more important things on her mind–like trying to hang on to her family’s plantation…and coping with regular hauntings by her great-great-grandmother’s nanny, a bossy busybody of a ghost who is set on marrying her off to the first eligible suitor who comes calling.

But when a friend is in trouble, Sarah doesn’t hesitate to get involved. Eulalee McBride has confessed to killing her husband, Kemper, a gambling scalawag with a violent streak a mile wide. She wants Sarah to dig up the dirt on her dead spouse to prove he was a mean old bastard…and that’s why she bludgeoned him to death right before he was trampled by a 1,400-pound horse. But Sarah Booth knows her old friend is lying through her pearly whites–probably to protect her teenage daughter Kip, an angry kid who may have had her own reasons for wanting Kemper dead.

There’s certainly no lack of suspects–or studs–in Zinnia, Mississippi, including Bud Lynch, a trainer with a nasty secret, who arouses killer lust inthe town’s women–all married and all ready to scratch each other’s eyes out for a roll in the hay with the Texas cowboy. Now, with the help of handsome Sheriff Coleman Peters, Sarah begins to put together the splintered pieces of the case. But as the season’s hunt ball draws near, she catches the unmistakable scent of blood…as a cunning killer gets ready to strike again. And this time it could send one late-blooming southern sleuth into an early grave.

In Sarah Booth Delaney, CAROLYN HAINES gives us an emancipated daughter of the New South: a steel magnolia with brains, grit, and heart who gives as good as she gets. And in Splintered Bones, she offers plenty of wickedly brilliant humor and good old-fashioned suspense.