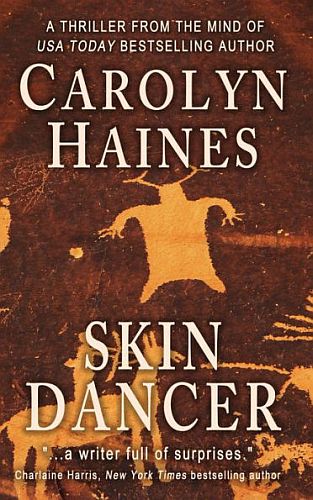 In the deep quiet of the South Dakota wilderness, a killer is on the loose. The victims are poachers and professional hunters. Their skinned and beheaded corpses are left hanging upside down. Rookie Criss County Deputy Rachel Redmond, a young woman with a troubled past and a need to prove herself, must find the killer.

Native American legend speaks of a Sioux warrior who took too much pride in his ability to kill. The gods punished him by taking his skin, leaving him unable to endure the sunlight. This warrior is said to roam the wilderness looking for those he can kill and “borrow” their skin. The Skin Dancer.

There’s a lot on the line for Rachel and the county residents. A highway project is cutting across the Sioux wilderness, opening the region for a multi-billion dollar technology development. The road is a point of controversy with environmentalists and Native Americans who want to preserve their sacred grounds.

When a spokesman for an animal rights organization (WAR) claims the murders, Rachel realizes she’s sitting on a powder keg. Old wounds and grievances, long buried, come to the surface. And the Skin Dancer strikes again, killing two more poachers.

As bodies pile up and tempers flare, Rachel has to find the killer, or killers, before Criss County erupts in a battle between those who want the road and Paradise Development and those who don’t.