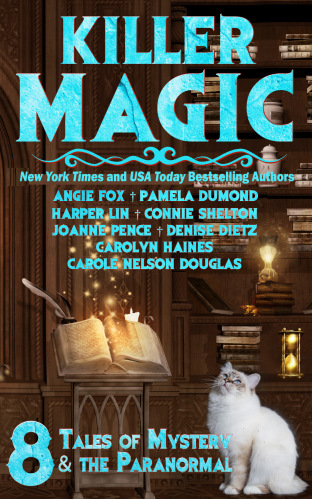 (This bundle is from the team that brought you USA Today, Amazon, B&N, and international bestsellers, KILLER CONFECTIONS and KILLER TAILS.)

Southern Spirits (paranormal mystery/romance) by Angie Fox A delightfully southern tale of mystery and intrigue. When out of work graphic designer Verity Long accidentally traps a ghost on her property, she’s saddled with more than a supernatural sidekick—she gains the ability see spirits. But when she’s drawn into a decades-old murder mystery, she wonders if some secrets should stay buried.

The Messenger (Mortal Beloved) by Pamela DuMond Book One (time-travel romantic thriller). This book is optioned for Film/TV. Sixteen-year-old Madeline meets Samuel when she time travels hundreds of years into the past. He’s half Native, she’s white, and their relationship is forbidden. Madeline time-travels to claim her birth right as a messenger—a soul who can slip through time, delivering messages that change a life or save many, but dark-souled time travelers crave her powers, and seek to seduce, or kill her.

Pawsitively Dead (A Wonder Cats Mystery – paranormal cozy mystery) by Harper Lin When Cath visits her parents’ graves, she finds the dead body of the local hairstylist, and later stumbles upon an older corpse, nearly a skeleton, of a woman who died in 1958. It has been exhumed from her grave, but who would do that? While the police are stumped, Cath, Bea, and Aunt Astrid suspect sorcery… necromancy…

The Ghost of Squire House (romantic fantasy) by Joanne Pence A compelling, prickly ghost with a tortured, guilt-ridden past and a lonely woman determined to make a fresh start soon find themselves in a battle of wills and emotion in this story of love, time, and chance.

Phantoms Can Be Murder (haunted cozy mystery) by Connie Shelton An enigmatic letter from her namesake aunt, a trip to England, and Charlie is seeing ghosts in the medieval Suffolk town of Bury St. Edmunds. But it isn’t only slightly-eccentric Aunt Louisa’s beliefs in the occult or her spooky “haunted sites” tours that pique Charlie’s interest. Something sinister is brewing and draws Charlie into an investigation
of crimes that are far too real.

Skin Dancer (mystery) by Carolyn Haines When poachers are murdered in the South Dakota wilderness, locals believe that a Native American legend, the Skin Dancer, is back and seeking retribution for those who cruelly slaughter animals. Rookie Deputy Rachel Redmond lacks experience, but she has plenty of grit and determination. What she must discover—and quickly—is whether the killer is a mortal foe or something from a Lakota legend?

Hallie’s Comet (paranormal time-travel romance) by Denise Dietz Hallie, a NYC artist, fills her canvasses with an 1890s Colorado mining town and a comet that hovers above a parlour house that includes a child named Knickers. Through Hallie’s paintings, Knickers reaches adulthood. Traveling into the past, Hallie witnesses a love that cannot be destroyed by time or space.

Neon Noir (hip urban fantasy) by Delilah Street Paranormal Investigator, aided by Film Noir superstars, takes on werewolf mobsters and a sexy albino vampire in a supernaturally lethal Las Vegas, which will take your money and your life.