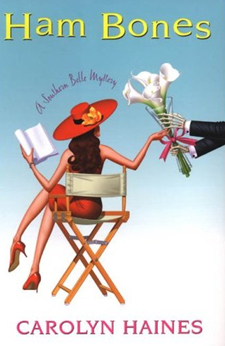 When Broadway comes to the Delta, Death takes a bow—but Sarah Booth is the star suspect… Zinnia is abuzz: displaced from its New Orleans venue, a red-hot touring production of Cat on a Hot Tin Roof is opening right in the heart of town, featuring hunky star Graf Mileau! While most folks are excited, Sarah Booth, who had her own brief stint on The Great White Way—and on the arm of Mileau himself—is less than thrilled. Graf is now linked with his costar, Renata Troviola, a dyed-in-the-wool diva who plans to ride Graf’s coattails all the way to Hollywood. But Renata’s trip to the top comes to a screeching halt on the play’s second night, when someone laces her lipstick with cyanide.

The plot thickens when Renata’s brother arrives on the scene and makes it clear exactly who he thinks the killer is. It seems Renata was stirring up plenty of drama behind the scenes, making enemies galore: her long-suffering makeup artist, an extremely harsh critic, an angry audience member…even boy toy Graf had a motive. But the most damning evidence points to Sarah Booth herself, and before she can say Big Daddy, she’s topping Sheriff Coleman’s list of suspects.

Being a P.I. accused of murder is bad enough, but being investigated by the potential love of one’s life is downright mortifying. Now, to save her reputation and her romance, Sarah Booth reckons she’ll have to bring the curtain down on a mystery with more twists and turns than the Old Muddy…

“Outrageous . . . the humorous romp through the pages is well worth taking.” – Publishers Weekly