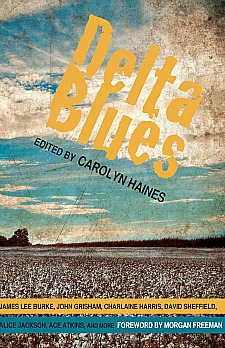 Delta soil is deep and rich. Down here things grow. When the alluvial soil washes over the land by the Mississippi River, cotton, corn, and soybeans take root and jump up. You see, as the water runs slow the heavy particles settle, and only the finest elements are deposited along the banks at the mouth of the river. This loam contains not just minerals, but the blood, sweat and pain of countless souls. While a few acquired great wealth, many broke their backs for little pay, or none at all.

And because of that, other things grow here too. The seed of imagination spouts powerful story tellers who, like their griot forebearers, use both words and music to create tales rooted in the old traditions, yet completely their own. Stories of lust, betrayal, loss, bad choices, revenge, heartache and heartbreak, but also grand hyperbole and dark humor. In this land a unique American form of music was born, a rootstock strong enough to spawn many derivatives. The Mississippi Delta is ground zero of the blues, meaning it was here where it all began.

This collection of short fiction captures both the art of the tale and the power of the blues, and is a nod at the human condition that often inspires musicians to write and sing the blues. These stories tell about bad men and bad women who sometimes do good–or sometimes follow their true nature. Some of these characters know all about the dangers of making a bargain with the devil. And some know the power of redemption. These are characters who would not be out of place in a Honeyboy Edwards tune, and would be right at home alongside the desolate wail of Clarksdale, Mississippi, native Son House.

In the preface of his book The Land Where the Blues Began, Alan Lomax notes that “the blues has always been a state of being as well as a way of singing.” He goes on to quote noted bluesman Leadbelly as saying, “When you lie down at night, turning from side to side, and you can’t be satisfied no way you do, Old Man Blues got you.” And as Leadbelly himself knew all too well, those dark moments can lead to very dark thoughts, and even darker acts. As Howlin’ Wolf said of that same feeling, “That’s evil. Evil is goin’ on.”

This music is the rootstock for all forms of American music from jazz to rock, not to mention the gritty (and often violent) narrative tradition it shares with the best of contemporary rap. Off this hardy, adapting Delta vine grew Chuck Berry, Led Zeppelin and the Rolling Stones. This land, which has seen so much wealth and so much poverty, is where it all began, in the heat and humidity of the Mississippi Delta cotton fields.

The story told by the blues is one of loss and suffering, bad luck and trouble, and joy and excitement as well. My grandmother kept me out of the juke joints during my youth calling them “buckets of blood”. Hard times, yes. but also hard rhythms, hard liquor, and “doin’ the mess-around.” Howlin’ Wolf sang about fire, death, crime, and of course evil, but he also said, “We gonna pitch a wang dang doodle all night long.”

That’s the blues. Those same elements, both contradictory and complementary, illustrate many of the stories in this volume.

Like the blues, these tales move and shift over the character of human nature. They combine an element of crime or noir with the world of the blues. a partnership that is easy to understand. Both are messy, and they both tell about pain. The South, and Mississippi in particular, has a long tradition of nurturing talented writers. But a writer doesn’t have to be born or live in the Pine Barrens or the Delta to feel this particular love of character and story. Writers, just like blues players-and blues lovers–come from all over the world. These stories, written by some of the finest authors working today, exemplify a natural talent for crafting a tale. Whether these are native born or adopted Southerners, each person in this collection shares a love of story that would make William Faulkner, Eudora Welty or Tennessee Williams proud. So lay your burden down a spell, have yourself a cool drink and hitch a ride down that dark and lonesome highway with these masters of the literary craft, and watch as their characters, their tales. and their take on the blues come to life.