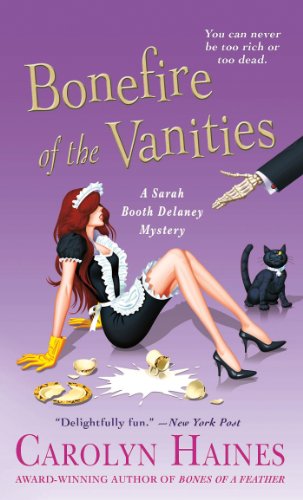 Bonefire of the Vanities

Despite the wishes of her overprotective fiancé, Sarah Booth Delaney can’t give up her detective work, no matter how dangerous it becomes. It’s too much a part of her. On this case, avoiding danger might be impossible—she’s on the trail of a porn-star-turned-psychic operating from a haunted estate on the edge of town. Medium Sherry Cameron promises to reunite grieving family members with their dearly departed, but it seems vaguely suspicious that Sherry will only accept emotionally vulnerable and tremendously wealthy clients. Aging billionaire Marjorie Littlefield fits the profile perfectly—her daughter died in a tragic accident as a young girl, she’s been estranged from her son for decades, and she’s planning to leave her considerable inheritance to her cat.

Convinced she’s uncovered a scheme to separate a lonely woman from her fortune, Sarah Booth talks her way onto the estate as a maid, where she finds Marjorie and several other wealthy eccentrics ready to commune with the dead. Between chores, Sarah Booth explores the estate, mingles with the other staff…and finds a few dead bodies. But which guest or staff member might be the killer? Even Jitty, Sarah Booth’s personal haint, won’t tell until Sarah Booth has uncovered all of Sherry’s well-kept secrets.

With spooks and charlatans around every corner, Sarah Booth is the only PI in the southlands who can put an end to this elaborate scam in Bonefire of the Vanities, the charming twelfth entry in Carolyn Haines’s sparkling series.

“This is the twelfth entry in the series featuring the spunky Sara Booth Delaney. For loyal followers or new fans, Bonefire is a happy romp filled with colorful characters.” —Houston Press

Carolyn is giving away a hardcover copy of BOOTY BONES, Sarah Booth Delaney Mystery Book 14, to one winner.