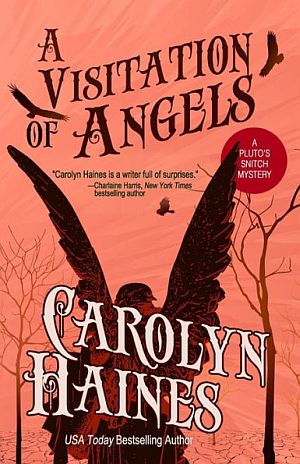 A Visitation of Angels

Elizabeth Maslow is an educated woman living in the isolated town of 1920’s Mission, Alabama. She’s defied the town’s definition of a woman’s place—she’s unmarried and given birth to a child with webbed hands and feet. In a town fraught with superstitions and religious repression, Elizabeth is dangerous.

But Elizabeth is much more than an unwed mother. Since the birth of Callie, who she believes is fathered by an angel, she’s been able to ̴dream the truth.” And she’s determined to testify in behalf of Slater McEachern, a man charged with the brutal murder of a local woman.

Elizabeth insists McEachern is innocent. She’s determined to speak, no matter the cost.

Spirit detectives Raissa and Reginald arrive to help Elizabeth save McEachern—before she ends up on the gallows with him.

Raissa and Reginald must unravel a crucial question. Does Elizabeth’s gift come from an angel, or from something much, much darker.

In the world of spirits and the dead, Raissa has learned to trust no one, especially not the dead. The dead lie.

*100% of all proceeds will be donated to Good Fortune Farm Refuge which will help animals receive medical treatment and loving homes.